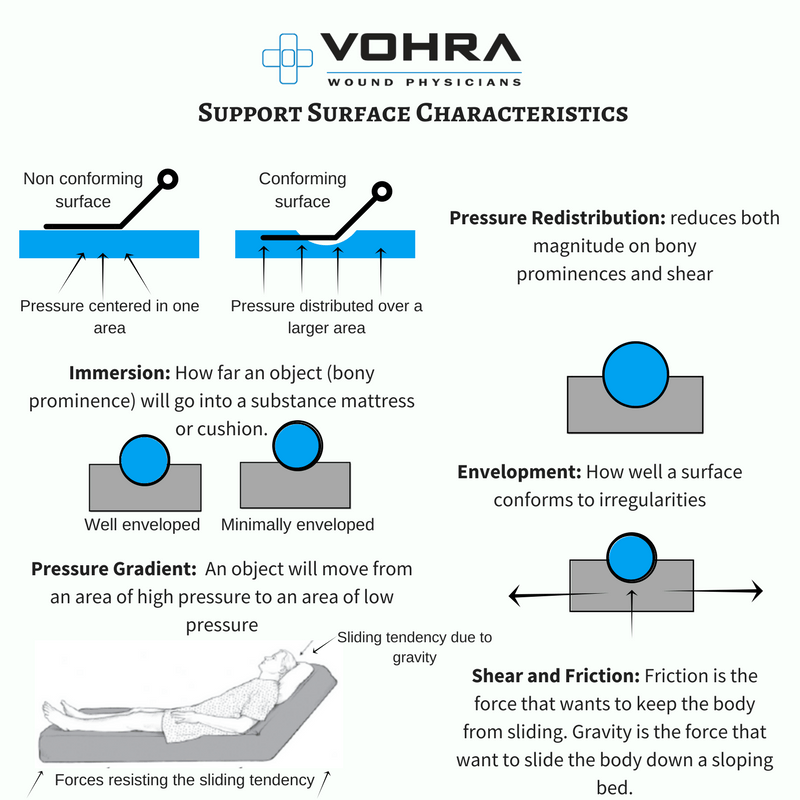 How to Prevent Pressure Ulcers

Pressure ulcer development is a complex problem that is influenced by a number of factors. These ulcers form as a result of the compression of tissue between a surface and bone, generally over a bony prominence: scapula, sacrum, heel, shoulder, elbow, etc. However, pressure ulcers aren’t limited to sites of bony prominences. They can also occur in other areas, such as on a calf that is in a cast.

The effect of surface pressure on tissue is dependant on magnitude (amount of pressure) and duration (length of time pressure is applied). The longer the duration, the smaller the magnitude necessary to cause a pressure ulcer; conversely, at high magnitude, these ulcers can be formed within a short time.

In addition, the decreased elasticity, dehydration, slowed metabolism and other skin changes that occur naturally with increased age exacerbate the likelihood of these injuries in elderly patients.

When choosing a support surface, consider these major factors to help prevent the development of pressure ulcers.

Pressure redistribution refers to how pressure is taken away from the area where the wound might be created, and redistributed over a broader — or more diverse — area. For example, a heel resting on a 1×1 inch area for a leg weighing 30 pounds produces 30 lbs per square inch of pressure. However, if you rest that leg on a 4×6 pillow, the pressure is redistributed over 24 square inches. This reduces the pressure at any given point on the leg to 1.25 lbs per square inch — a significant difference.

A conforming surface distributes pressure over a larger area, reducing both magnitude on bony prominences and shear. When it comes to the pressure redistribution of a surface, make sure to consider:

Prevent injury due to friction and shear by having the patient assist when moving in bed, using a lift sheet, and keeping the patient’s head a relatively low angle.

Increased temperature results in increased metabolism and use of 02 and nutrients. For every 1.8 degree Fahrenheit change, there is a 10-percent increase in the use of these bodily resources.

Skin that has too much moisture is prone to breakdown; perspiration, urine, feces, fistulas, and wound drainage all lead to maceration. Macerated skin is more susceptible to damage due to friction and shear.

Other items to consider when choosing a support surface to prevent pressure wounds are:

Remember that pressure redistribution and repositioning are the key to the prevention and treatment of pressure ulcers. Remove the cause, and you’ve won 90-percent of the battle.