Patients with multiple co-morbidities including Peripheral Arterial Disease, Diabetes, End-Stage Renal Disease, Dementia and poor or no mobility who develop lower extremity infections are at high risk for limb loss, which increases mortality.  Conversion from BKA to AKA is common in these patients.   In some populations AKA may be the preferred initial surgery, thus avoiding multiple surgical interventions with persistent failure to heal. However, no intervention reduces mortality other than preventing limb infection and wounds from occurring.

LW is a 40-year-old. Female with DM, PAD, ESRD and previous R BKA.  She developed necrotizing fasciitis of her left foot, which led to deep debridement and skin grafting, as well as balloon angioplasty.  Her skin graft eventually failed, and she required L BKA.  After two weeks her L BKA began to dehisce.  AKA was discussed but the patient refused.  Management of the dehiscence included debridement and betadine.

DP is a 66-year-old. female with PAD and Hepatitis C.  A bypass graft of her left femoral artery became infected, and the infection spread to her foot.  The foot wound was debrided and treated with a wound vac, which was ineffective.   The patient underwent a BKA procedure, which had to be revised once due to poor healing and dehiscence.

Unfortunately, this is an all-too-common narrative in patients with multiple morbidities who develop lower limb infections.  The aim of this paper was to review the risk factors and management options for lower limb infections and amputations; to assess the morbidity and mortality associated with limb amputation; to determine the incidence of BKA to AKA conversion; and to evaluate the necessity of BKA in patients for whom an initial AKA might be a more reasonable option. 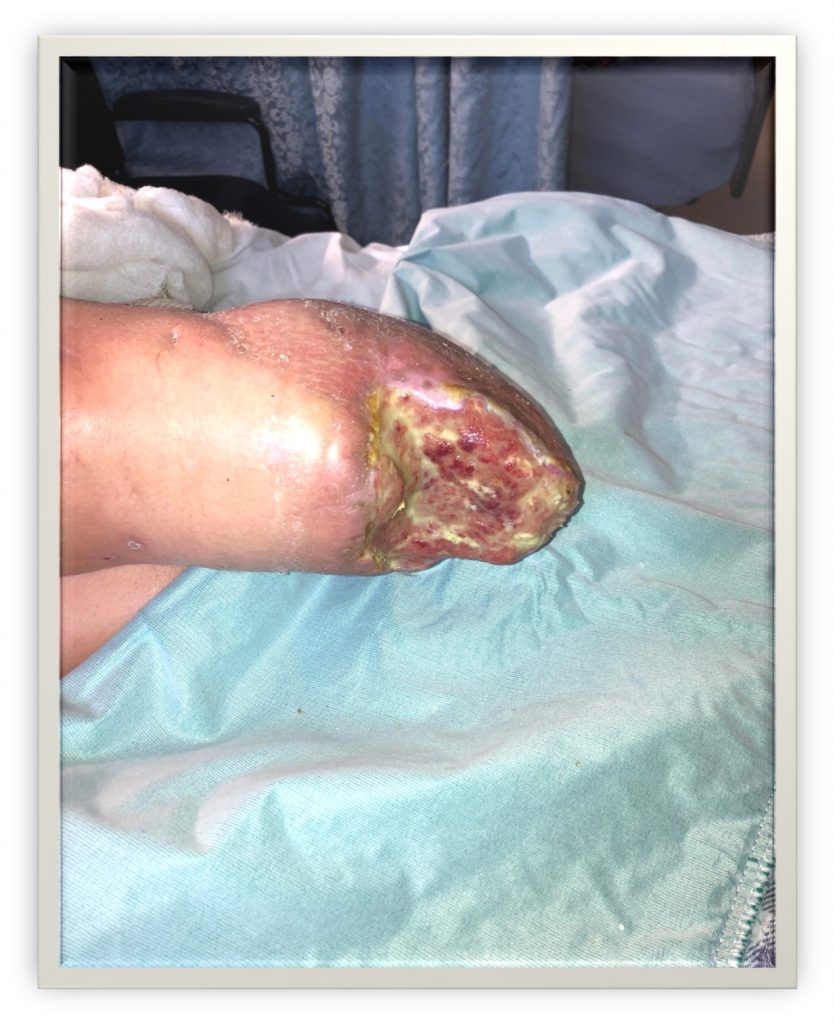 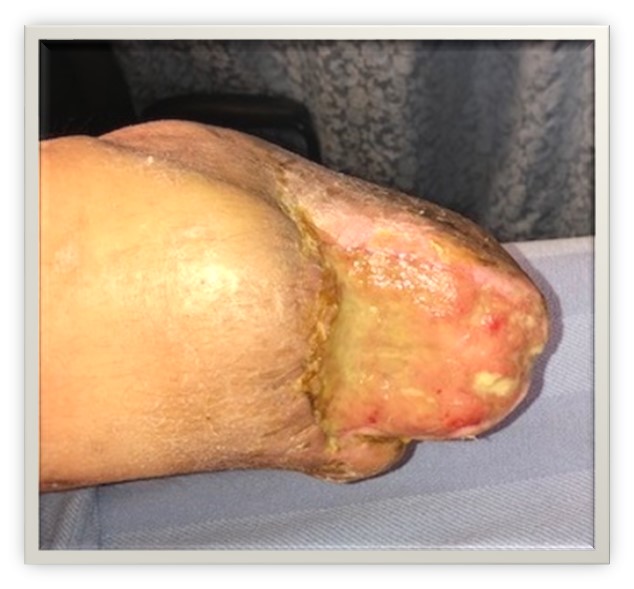 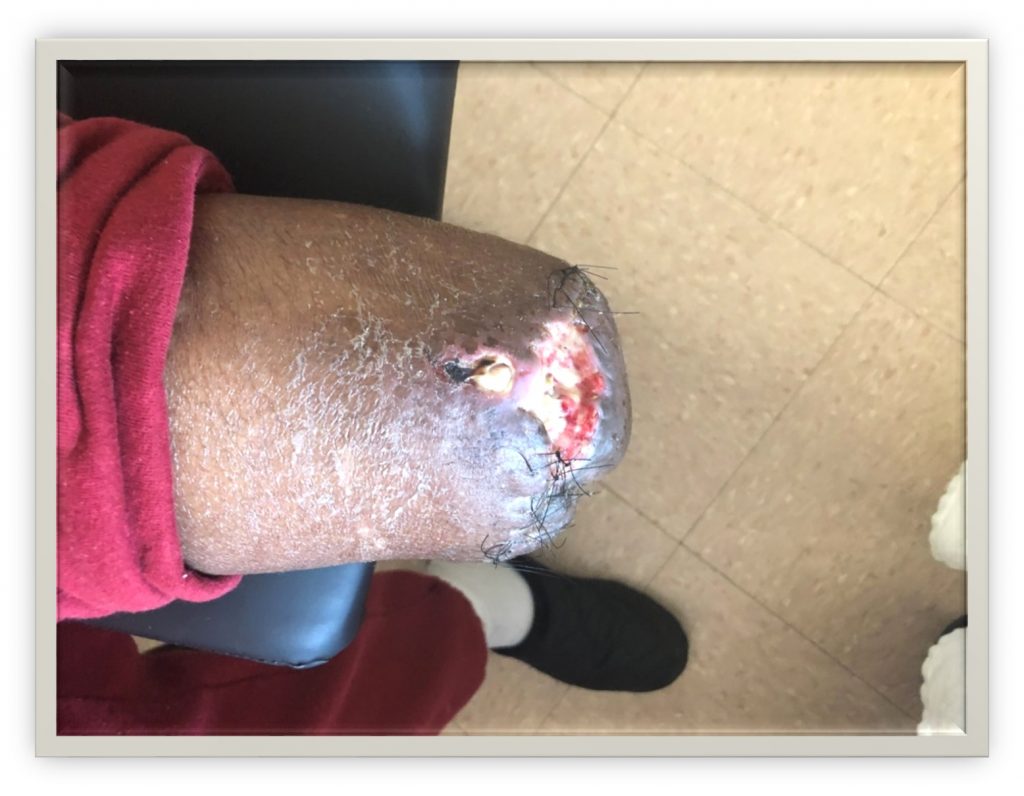 Image 3:  Patient DP one week after  BKA.  Wound has dehisced and developed infection. 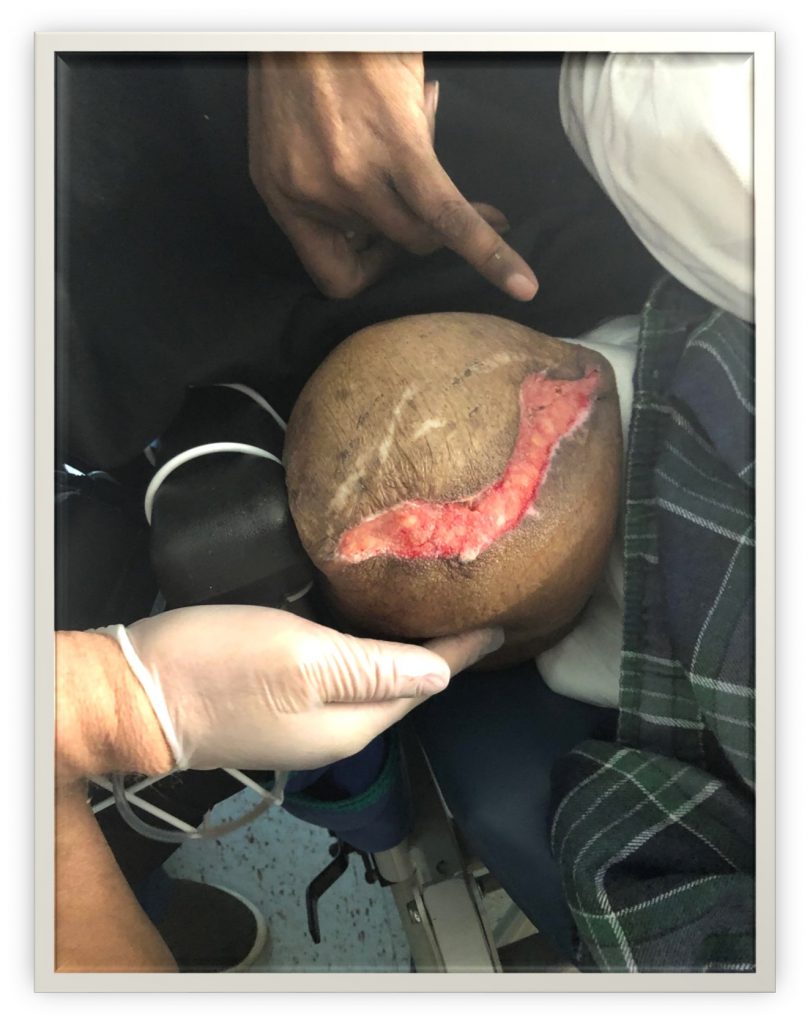 Data on the two case studies was collected, including the images shown here.  An internet academic literature search was performed with the following keywords:  BKA, AKA, BKA to AKA conversion, lower extremity wounds, lower extremity limb loss, management of lower extremity wounds.  Studies that focused on patients with DM, PAD, ESRD, Dementia and/or Long Term Care Facility residency were included in the analysis, while studies of lower limb loss due to trauma, combat or for other reasons were excluded.  A total of eleven (11) articles were selected.   Information in the articles was organized into the following outline:  Common Progression of Limb Loss; Incidence of Amputation; Primacy of BKA; Palliative Nature of Lower Limb Amputation; BKA to AKA Conversion; AKA Instead of BKA; Outcomes of the Cases.

Estimates of annual lower limb amputations in the US range from 60,000 to 185,000.  Once a foot is lost through BKA, preservation of the lower stump is desirable to facilitate rehabilitation and/or prosthesis placement, as well as to mitigate psychological trauma of AKAs, which generally have a higher mortality rate than BKAs.

BKA to AKA conversion is roughly 20% in many studies.  Conversion usually occurs because of infection.  Necrosis can be managed with general wound care and does not necessarily predict eventual AKA.

One study found that an initial AKA may the preferred treatment in non-ambulatory patients with ESRD, obviating the high failure rate of BKAs in these patients, as well as their increased mortality from repeated operations.

Proceeding directly to AKA in some patients presents ethical and psychological challenges, yet may be more humane than “whittling away” at the limb of a seriously ill or debilitated patient.  Consideration of “AKA first” may be a reasonable approach on a case-by-case basis with informed discussion with patients, caregivers and advocates.