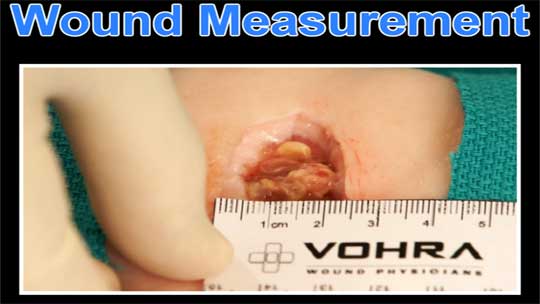 [Video] How to Measure Wounds With High Accuracy: Tools & Techniques

This demonstration is performed by a trained wound care physician for educational purposes only and should not be tried at home.

In this demonstration, we will be exhibiting the correct measurement of a wound using the linear measurement or clock method. For wound size measurement using the clock method, you will want to have a disposable ruler or paper or similar measuring device as well as a cotton-tipped applicator.

The measuring device is either a paper or plastic disposable measuring tape. It is generally marked in centimeter markings with sub-markings in millimeters. A cotton-tipped applicator is useful for measuring the deepest part of the wound and checking for any undermining due to factors like necrotic tissue or granulation tissue.

This model demonstrates a wound. By convention, the superior aspect of the wound would also usually coincide with the head. The inferior aspect would be the foot. The direction of length is head to foot for measuring wound length. Width is measured from left to right or right to left. We measure the wound depth at the maximum location of depth in the wound.

The left to right or right to left convention does not matter in terms of the documentation. It is important, however, that length and width are correctly measured and documented. This is because the convention from head to feet for the direction of length and left to right for width are important in being able to reproduce measurements between measurers.

In this particular instance, we would start off by measuring the wound size in the length dimension. Where there is the maximum length of this wound of approximately 5.7 centimeters. The width would then be measured at its maximum point of width which is 2.5 centimeters. Both the figures can be multiplied to get the wound surface area.

We measure the wound depth by probing the wound with our cotton-tipped applicator using the cotton end. We would probe all areas of the wound to determine where the deepest part of the wound is located. It appears to be approximately in the middle of the wound. We would then slide our finger down the cotton-tipped applicator to where it is flush with the intact skin. Pinch the applicator at that point and withdraw from the wound. This can then be laid over your measuring device or the disposable ruler and the depth determined. In this particular instance, it appears to be 1.8 or 1.9 centimeters.

Once the length, width and depth of the wound have been measured, it is important to then record any evidence of undermining and what the dimensions of that undermining are. In determining the undermined area, gently probe the wound with your cotton-tipped applicator circumferentially around the wound. You can see that over on this side of the wound we are starting to see some undermining. It appears at this location, the cotton-tipped applicator slips deeper under the wound than it does at any other point. This would be the maximum undermined area.

To measure the tunneled area, you will insert the cotton tip applicator into the tunnel. Hold the applicator at the wound edge and measure it against the disposable ruler. The clock method may also be used as a reference when documenting the location of the tunneled area.

As you can see, by convention, the superior aspect of the wound or the head aspect of the wound would be 12 o’clock. If we then progress clockwise around a clock face, the area of maximum undermining is approximately 10 o’clock. Similar to how we measured the depth of the wound, you would want to slide your finger down the cotton-tipped applicator. Pinch it with your nail. Then, bring it up to your measuring device. In this particular instance, it appears that the undermining in wound size is approximately 1.7 centimeters. As you will recall from the last image, the undermining is located at 10 o’clock. This will be recorded as 1.7 centimeters of undermining at 10 o’clock.

A certified wound therapist is well aware of the various measurement systems and the correct process to document wounds. This is important because wound size is one of the few indicators used for gleaning importantwound care insightslike estimating the wound healing time. Health care providers who are skilled in wound care can empower long-term care facilities with a robust wound care system to improve patient outcomes. Using the right process for measuring and documenting wounds is essential, and health care providers without expertise in the area could lead to complications and possiblelegal proceedings if the level of care doesn’t match the minimum standards laid down by law.