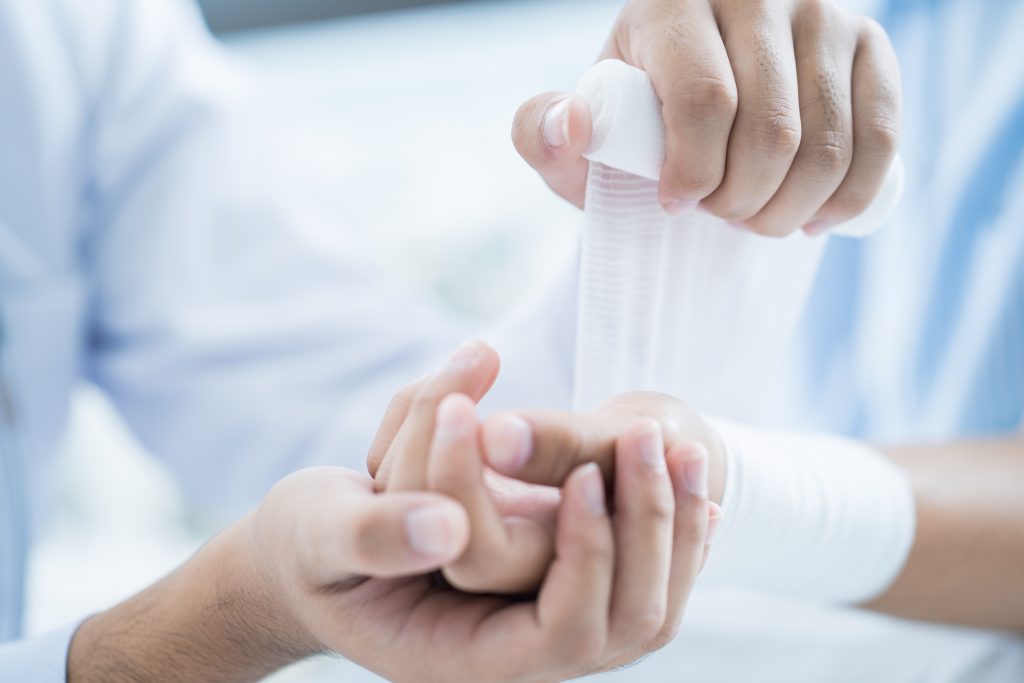 When evaluating a wound and determining the best course of action, there are several viable treatment options to help promote effective healing. Each treatment has the same desired outcome: to create an optimal healing environment. Physicians may choose a course of treatment based on the nature and severity of the wound, their clinical preference, patient preference and staff expertise. Generally, a single treatment is preferable to multiple procedures, so it is important to make measured decisions regarding course of care. 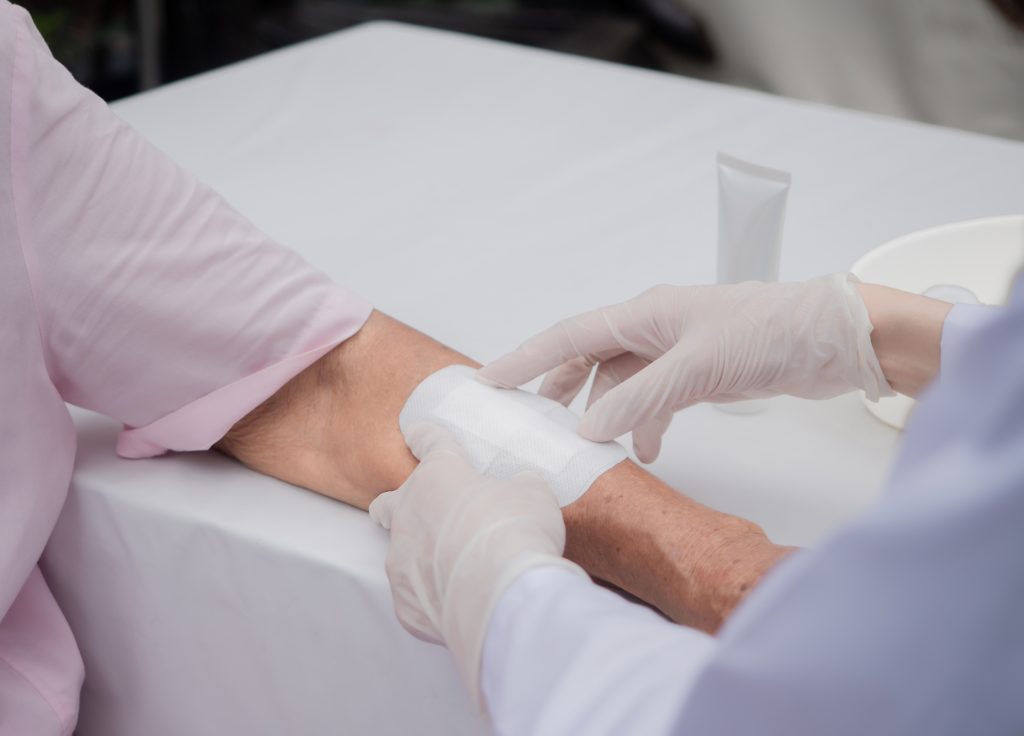 Sharp debridement is particularly valuable when treating wounds presenting with yellow necrosis or black eschar, which are two common types of necrotic tissue. As with all surgical procedures, in order to effectively perform debridement, it is important to understand proper technique, wound considerations, and anticipated results.

Understanding debridement is a critical skill for wound physicians, but it is also important knowledge for practicing clinicians and skilled staff that work with patients who suffer from or are at risk for wounds. In this article, we will provide a comprehensive overview of the different types of debridement and their considerations. We will also present further detail about surgical debridement and provide an in-depth explanation – including video demonstrations – of sharp debridement for wounds with yellow necrosis and black eschar.

Debridement – the removal of necrotic tissue or foreign material from the wound bed – is an important aspect of effective wound care. The decision to perform debridement is based on the condition of the patient’s wound bed and the surrounding tissue. Debridement is typically performed on wounds that have not progressed beyond the first stage of healing, or chronic wounds that are infected and/or worsening. Removing dead or infected tissue improves the wound environment and allows the healing process to restart.

Debridement offers numerous benefits to wound patients. It promotes healthy tissue growth, discourages bacterial infection and wound deterioration, and minimizes complications and scarring. Even a small amount of necrotic tissue (5-10%) can significantly increase risk of infection, so removal through debridement is very valuable.

There are several different modalities that a physician can employ when performing debridement: autolytic, mechanical, enzymatic, or surgical/sharp. Deciding between these options depends on the nature of the wound, the age and overall health of the patient, and the risk of infection or complication. 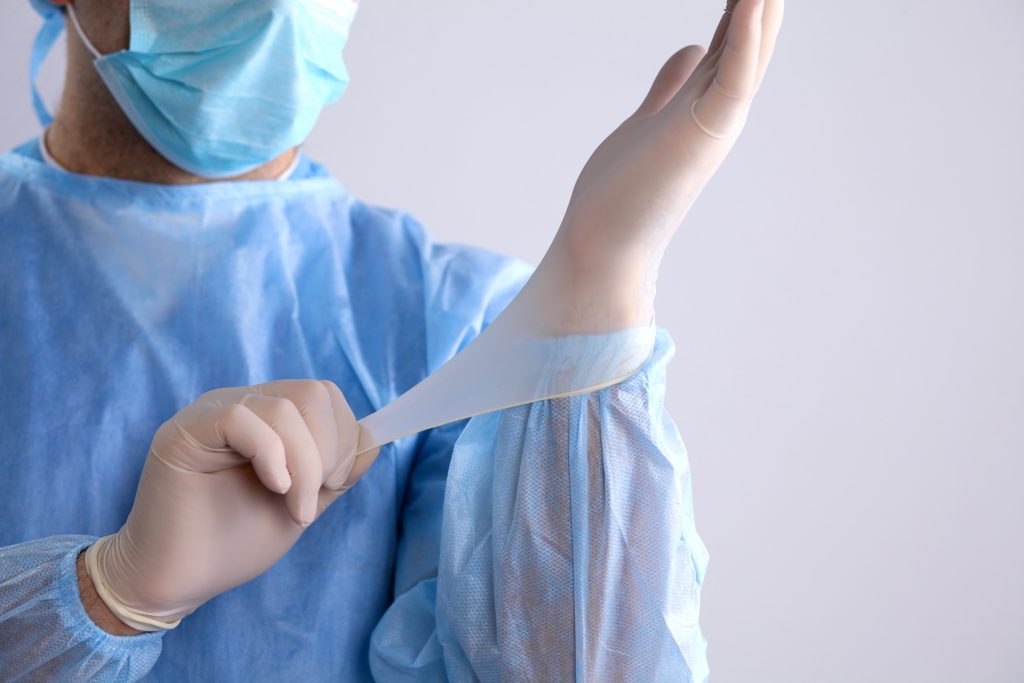 Autolytic debridement is the slowest method of debridement. It involves using the body’s own enzymes and natural fluids to soften and slowly eat away at necrotic tissue. This method may be appropriate when debriding a small amount of tissue, or when a wound has already been debrided and a physician wants to prevent re-accumulation of necrosis.

This method of debridement is best when treating noninfected wounds or pressure sores, although it can be used in tandem with another debridement method for infected wounds. When performing autolytic debridement, there are wound dressings available that promote a favorable environment for enzymatic action. 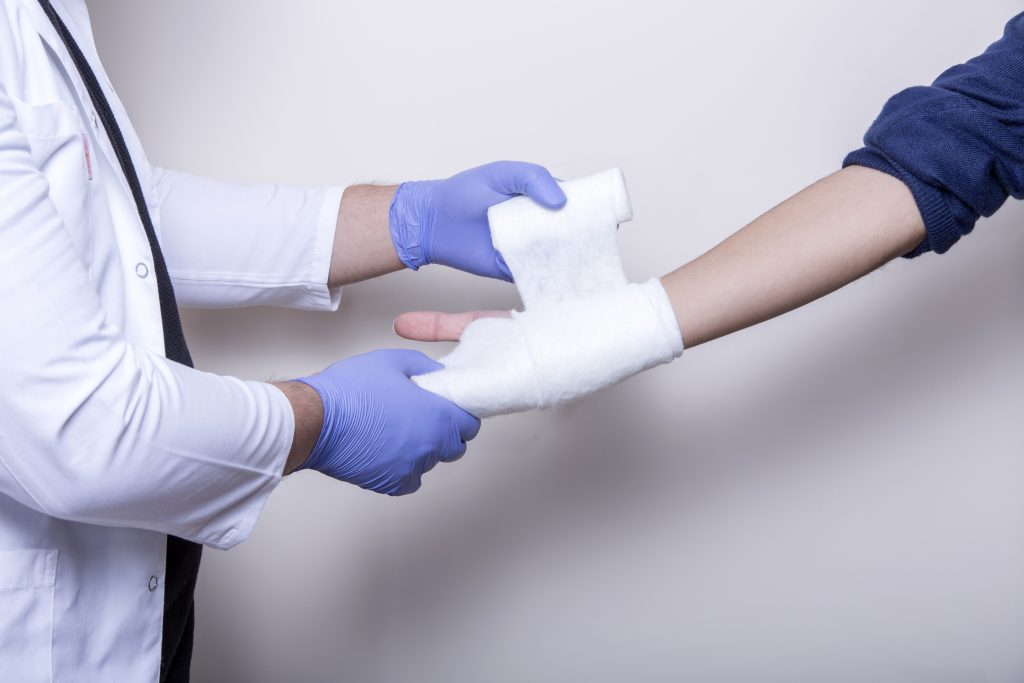 Enzymatic debridement, also known as chemical debridement, uses enzymatic debriding agents to soften necrotic tissue over a period of days or weeks. This is done using an ointment or gel with enzymes derived from plants, animals, or bacteria. Enzymatic treatment is applied once or twice per day and a patient’s wound dressings must be regularly changed in order to remove softened necrotic tissue.

Enzymatic debridement is recommended for patients at risk for bleeding or complications and is not used for large or severely infected wounds.

Surgical or sharp debridement is the process of cutting off necrotic tissue using a scalpel, curette, or surgical scissors. When performed by a skilled clinician, this is a highly effective method of debridement. However, since it is a surgical procedure requiring local anesthesia, it is most commonly used when other methods of debridement have failed. Surgical debridement requires a practitioner trained and licensed to perform these procedures. Depending on the nature of the wound, sharp debridement may have to be performed several times in order to effectively remove all necrotic tissue. It is recommended for wounds that have not responded to other forms of debridement and for wounds that are significantly extensive or painful.

Here are some important factors to assess when debating sharp debridement:

Sharp debridement should only be performed after careful deliberation by a patient’s care team and the conclusion that it is the best course of treatment. Assessment factors should include the nature of the necrosis, the infection risk, the location of the wound in relation to surrounding anatomy, and the potential success of other debridement methods. Sharp debridement can also lead to possible bleeding and requires anesthetic and follow-up pain relief, so a patient’s general health and procedural tolerance should be evaluated. 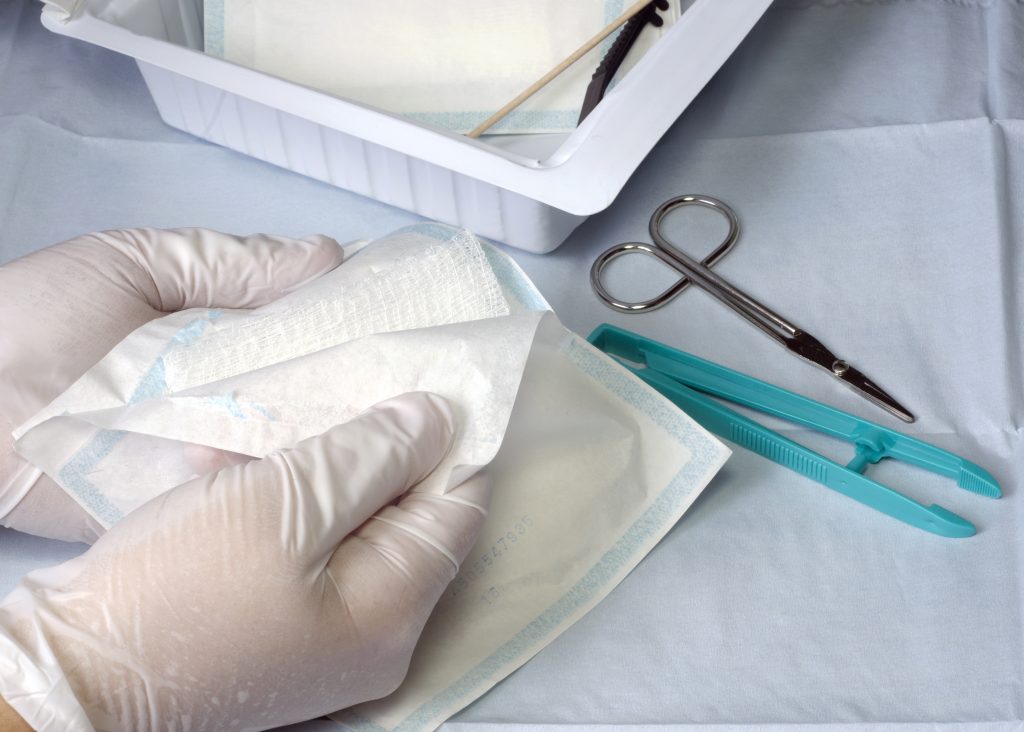 The clinician performing sharp debridement should also be familiar with the levels of tissue found in a wound, from the epithelial tissue to the subcutaneous and muscle tissue. Typically, sharp debridement involves the removal of skin and subcutaneous tissues in the necrotic area. In some cases, necrotic tissue may also be removed from the fascial plane and the muscle level.

The patient’s history and overall health should be taken into consideration when assessing the need for sharp debridement. If the patient is on anti-coagulant medications such as coumadin, Plavix, or a heparin-type medication, it may be judicious to perform a staged debridement so as to control any possible hemorrhage.

If a patient has diabetes mellitus, sharp debridement requires increased deliberation. Patients with diabetes are at risk for vessel disease, infection, and poor healing, so sharp debridement should be considered with input from a diabetologist, vascular and general surgeon, and other care team members as indicated.

Prior to performing a debridement, it’s essential to provide adequate anesthesia so as not to cause any discomfort to the patient. This can be achieved using topical benzocaine or injectable anesthetic such as lidocaine. If a patient has anesthetic sensitivity or intolerance, this should be assessed and considered prior to performing sharp debridement.

One valuable way to improve your understanding of sharp debridement is by observing the procedure. Consider two video demonstrations of different types of sharp debridement: one performed on a pressure ulcer with yellow necrosis, and one on a pressure ulcer with black eschar. Eschar (e.g., black eschar) and slough (e.g., yellow necrosis) are the two main types of necrotic tissue found in wounds. Understanding how to effectively debride these types of wounds is valuable knowledge for clinicians.

These demonstrations are performed by a trained wound care physician for educational purposes. This procedure should not be attempted outside of a care setting with appropriate assessment and oversight by trained medical professionals.

Sharp Debridement of a Wound with Black Eschar

Black eschar is commonly found on pressure ulcers. Black eschar is dead tissue that presents as tan, brown, or black. Eschar is part of the body’s natural healing process and is not always a cause for concern. However, if it is infected, peeling or oozing, or not healing, it is a good candidate for debridement. In this demonstration, sharp debridement is being performed using a dermal curette.

When performing debridement of a pressure ulcer with black eschar, typically the only sensate area that may cause discomfort to the patient is the interface between necrotic tissue and the healthy remaining skin. To adequately anesthetize the area for debridement, a small wheel on the edge of the healthy skin can be created with injectable anesthetic. This is then extended underneath the area to be debrided in a fan-like fashion. Once adequate anesthesia has been performed, the necrotic area is addressed.

A #15 scalpel, or a dermal curette, can be used. Forceps can also be helpful. Initially, the leading edge or interface between the normal skin and the necrotic area is identified. This is where the debridement should begin. A small incision at this interface is made to create a leading edge. This is then elevated using the forceps or the dermal curette. Tension is maintained on the black eschar and the interface between the subcutaneous and the epithelial tissue is incised with the scalpel.

Using the edge of the scalpel and the body of the blade, adequate incision can be performed. It is important to identify the interface between the necrotic tissue and healthy tissue and maintain the incision within this plane. As one performs the debridement, the necrotic eschar will begin to peel off, similar to how an orange peel removes from an orange.

After successfully debriding a pressure ulcer with black eschar, there will be increased healthy tissue growth and the wound should restart the healing process. 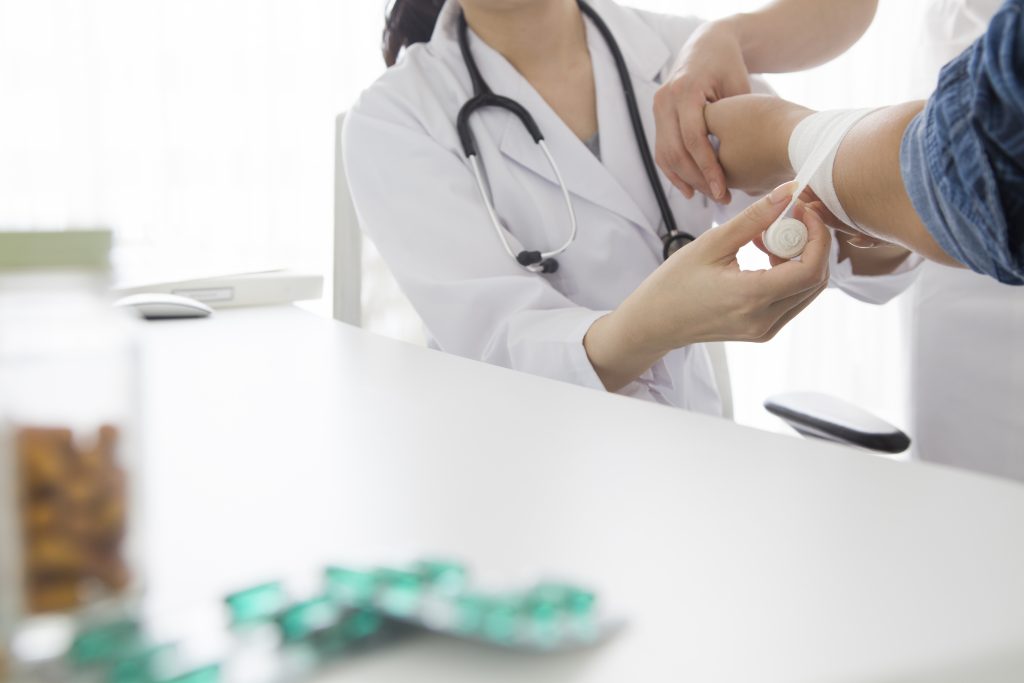 Sharp Debridement of a Wound with Yellow Necrosis

In this demonstration, debridement is being performed using a pig’s foot and chicken fat to simulate a pressure ulcer that has yellow necrosis present within the base of the wound.

Initially, a dermal curette, 4 millimeters, has been selected. The dermal curette has cutting edges on both sides of a circular blade. It is commonly held like a pen and applied at a 45-degree angle to the wound bed. It’s important to maintain the curette parallel to the surface of the wound as turning it on edge will produce a knife-like application.

First, the physician will begin to remove the necrotic tissue from the underlying healthy tissue using short, even strokes with minimal pressure. This will prevent injury to underlying structures and will minimize any bleeding. If there are tendons or sensitive critical structures within the base of the wound, these can be avoided to prevent underlying injury.

As the debridement progresses, the yellow necrotic tissue is removed. Any underlying capillaries that are bleeding can be easily controlled with pressure and the wound can finally be cleansed with saline to remove any lose debris.

Alternatively, a #15 blade scalpel and forceps can be used to perform debridement of yellow necrosis. This is usually the method for a larger wound or a wound that has more adherent yellow necrosis than can be easily removed with a dermal curette. Sometimes the dermal curette blade will fill with the removed necrotic tissue and will require more than one instrument.

The completion of a successful sharp debridement will promote healthy wound healing and minimize the risk of infection.

Debridement is a valuable treatment option for patients suffering from chronic, infected, or non-healing wounds. Depending on the nature of the wound, there are several types of debridement available. Before performing a debridement, clinicians should conduct a comprehensive assessment of a patient’s health status and risk factors and ensure that they have the proper tools and equipment needed for safe treatment.

The information in this article should have provided you with a general understanding of debridement and its various benefits, techniques, and considerations. Physicians that are considering a transition to wound care can learn more about why physicians choose to practice with Vohra and the typical day of a wound physician. To learn more joining us, visit our open physician careers now.

These demonstrations are performed by a trained wound care physician with the usage of a pig’s foot for the purpose of showing the correct method of anesthetizing with injectable anesthetic. This article and video demonstrations are for educational purposes only and should not be tried at home.

The medical community has been hit incredibly hard by COVID-19, and most physicians are no exception. Physicians working in hospitals are struggling with patient overflow, supply shortages, and the ever-present […]

When evaluating a wound and determining the best course of action, there are several viable treatment options to help promote effective healing. Each treatment has the same desired outcome: to […] 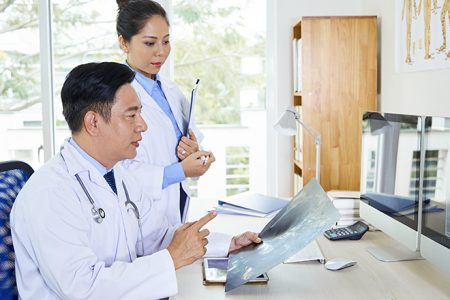 Although most people who pursue medicine do so to help people, the reality of being a physician often includes ample administrative work, such as data entry and documentation in an […] 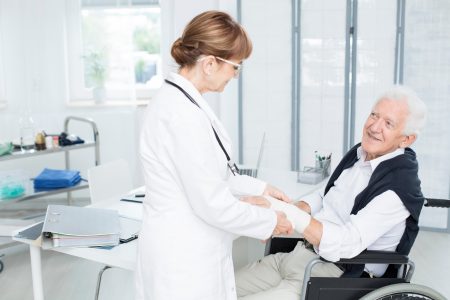 A Second Chance at Medicine: Why Doctors are Looking to Wound Care as an Alternative Physician Career

Updated 10/24/2020  Doctors might not consider or discuss the notion of practicing outside of one’s trained specialty, but the concept is gaining awareness among physicians seeking change. Wound care is […]