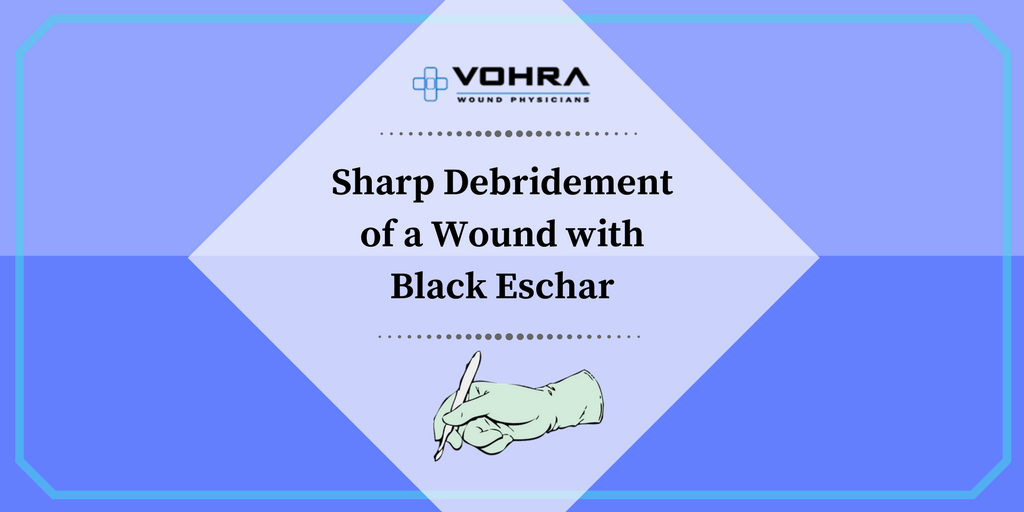 Debridement of a Wound with Black Eschar

This is a demonstration of a wound care physician performing sharp debridement of a sample wound with black eschar. Along with the discussion based the usage of proper instruments and techniques used in the procedure, we’ll learn why black eschar develops and why sharp debridement is often necessary to remove necrotic tissue to heal wounds.

Disclaimer: This demonstration is performed by a trained wound care physician with the usage of a pig’s foot for the purpose of showing the correct method of anesthetizing with injectable anesthetic. This article demo is for educational purposes only and should not be tried at home.

When performing debridement of a black eschar of a pressure ulcer etiology, commonly the only area that is sensate and may cause discomfort to the patient without adequate anesthesia, is the interface between necrotic tissue and the healthy remaining skin.

To adequately anesthetize the area for debridement, a small wheel on the edge of the healthy skin can be created with injectable anesthetic. This is then extended underneath the area to be debrided in a fan like fashion. Once adequate anesthesia has been performed, the necrotic area is addressed.

A number 15 scalpel or a dermal curette can be used. Often times a forceps is also helpful. Initially, the leading edge or interface between the normal skin and the necrotic area is identified. This is where the debridement should begin. A small incision at this interface is made to create a leading edge. This is then elevated using the forceps or the dermal curette. Tension is maintained on the black eschar and the interface between the subcutaneous and the epithelial tissue is incised with the scalpel.

Using the edge of the scalpel, and the body of the blade, adequate incision can be performed. It is important to identify the interface between the necrotic tissue and healthy tissue and maintain incision within this plane. As one performs the debridement, the necrotic eschar will begin to peel off. Similar to how an orange peel removes from the orange fruit itself.

This plane is now being developed. The demonstrator works around three edges of the eschar, maintaining the interface between the healthy tissue and the dead necrotic tissue while maintaining tension with the forceps.

This will illustrate the various levels of tissue that may be encountered during a debridement. Initially, one can see the epithelial surface. Immediately underneath this is the subcutaneous tissue. At the base of the wound, one can see the muscle level.

Watch the video demo in its entirety here: https://youtu.be/z8WwniRtqEw

The Allure Group in New York City, NY is a corporation that has chosen to partner with Vohra Wound Physicians in all 6 of its skilled nursing facilities. This standardized […]

Summary Greystone Miami Region selected Vohra in April 2017 to provide physician-led expertise in wound care.  This was based on Vohra reputation and experience. Greystone’s Director says “the results speak […]